“I’m sure there are several different opinions of what a retro housewife is, but for me its many things. It's deeper than just liking vintage clothing or objects. It's rejoicing in taking care of your family, it's pride in your home, [in] being a good hostess. It's wanting what is best for your family and knowing that you are the one that can best provide those things that are best.” 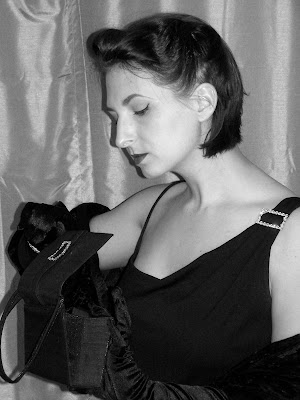 Jenny, who authors the Retro Housewife Blog, loves the simplicity of days gone by and strives for that in her life. Although she considers herself a modern retro housewife and is passionate about her roles as housewife and mom, Jenny finds it important to take time to nurture herself and find her own individuality through things that she loves.

This Army wife and mother is orginally from New York. She lives for God and her family, is passionate about housekeeping and child rearing, and believes in old fashion values and morals. Jenny tries to teach her daughter about differences in people and about kindness despite those differences. She also has taught her that words can hurt and that compassion is a quality she already has in abundance. “God is huge in our life, and he guides us every step of the way. We strive for togetherness. It seems like so many families are just doing their own thing these days. They are more like roommates than family”.

Jenny's talents are not limited to being a thrifty and financially frugal housewife. She is also quite creative. She sculpts, draws, paints and is an interior designer. She also loves photography and is a pretty good at it. Jenny related, “when my daughter was a baby I would take a lot of photos of her and have them developed at Walmart. I soon learned to bring my camera with me because they thought they were professional and wouldn’t let me print them."

Jenny comes from a long line of artists. She is a descendant of Lillian Miller, a famous painter who specialized in Japanese art. Her grandfather was a sketch artist and carver. Her father paints, sculpts, draws, and has the ability to quickly teach himself to play most instruments. It’s no wonder that this housewife's creativity comes naturally.

Jenny admits that she is a neat freak and that it helps in being a retro housewife because cleaning doesn’t feel like a chore. “I love everything in its place. On the other hand, that can be a negative too, because anytime things are out of place, I feel like my house is a wreck!”

She also loves to cook. Her daughter has been helping her since she was a year old. “Some days we just get up and want to make cookies so that’s what we will do. These are the memories that will stick with her.”

This passionate housewife and mother has had to face one of her biggest challenges, to which many housewives and mothers can relate - monotony. Jenny explained, “We love being together, but you really do have to do your own thing once in awhile, especially as a mom. Being a mom and a wife is important, but you have to remember that there is an individual inside and if you don’t nurture that person you will disappear and become quite dull”.

When Jenny’s husband got out of the Army and they moved to Illinois, she went through a few months of feeling worthless and boring. Jenny was used to doing it all and felt guilty if she asked her husband to do anything. “I had gone from being a leader of my husband’s company Family Readiness Group, meeting with higher ups in his battalion, dealing with the family members, solving problems, etc., to being stuck in the house all day everyday with no friends and a two year old who, at that time, they said was autistic. I just felt like I had no clue who I was, I was lost. I never had a break from my daughter, I was never, ever alone.”

Jenny then started to take steps to take care of herself. Jenny bought herself a membership at a gym that had a daycare. She would spend an hour or two each day doing Yoga or Pilates while her daughter happily played with other children her age. At home once or twice a week, Jenny would leave her daughter downstairs with her husband, put the baby gate at the bottom of the stairs, take a bath, give herself a facial, and read while she soaked. “I did something that was for me and that saved me. When I saw the positive effects taking care of myself gave my family, I started to do more for myself. You need to take time for yourself each and every day, even if its only 20 minutes.”

Jenny also found herself through her blog. “At first I didn’t tell anyone that I was starting it, that way no one I knew could read it and know it was me. I wrote from my heart and with honesty, no fear of hurting anyone’s feelings. As comments came in and I got to see that other people appreciated my thoughts and there are people out there like me. That was priceless.”

To women who have lost their individuality Jenny advised, “Fight for it! I know how confusing it is. I mean how in the world do you figure out who you are? Take a notebook and get away by yourself, write down your perfect life, your perfect work, no limitations. For instance, mine was getting a massage once a month, having a tiffany blue kitchen, taking a class, having hot stew on a cold winters day, learning a new craft.” Jenny ended up with a list about a mile long. And what she learned was that even though some of those things in her list, were not possible to do because of her circumstances, many of the small things were and that they added up to a big part of her life. “So what I couldn’t achieve, I kept as a dream, a goal. What I could achieve, I started to work on," she said.

Her Retro Housewife Blog was Jenny’s first experience blogging. She started this particular blog back in May of 2008. At that time she was learning to clean and live without chemicals, because of her daughter’s sensitivity. Her intention was for her blog to be about going green. Then as Jenny started to write she found that she had other things to say and people were actually reading , which still amazes her. So The Retro Housewife Blog as we see it now was born. “My blog is actually a hodge podge of things. One day you may come on and find a recipe or a book review, the next day it may just be my opinion on a subject. Sometimes I run series, for example I recently ran one that featured daily videos on how to apply pin up make up. I like to post things right out of my vintage housewife manuals so my readers can see right into the past, see what housewives were told, what was expected.”

In one of her posts for her Retro Housewife blog, Jenny describes what her perfect town would be. “A perfect place for me would be a place of simplicity where women stayed home with their children. Their children could roam the neighborhoods playing without the fear of abduction. New neighbors would be welcomed with a plate of cookies. Dinner parties would be the norm and people would take pride in the appearance of their homes as well as themselves.” As a side note, after Jenny had described her perfect town, she realized that she had created a Stepford town.

Jenny’s passion for vintage has always been there. Back in the fifties, Jenny’s father who was then a teenager belonged to a band. So she grew up with him teaching her the great songs from the fifties. In addition she also grew up watching shows like: I Dream of Jeannie, I Love Lucy, The Honeymooners, The Andy Griffith Show. She also enjoys old films like, Roman Holiday and Hitchcock films. Her favorite artists are Marilyn Monroe, Grace Kelly, and Audrey Hepburn. Jenny gets inspired by her collection of vintage cookbooks, vintage aprons, table cloths, and older TV shows and movies.

Although Jenny doesn’t consider herself a Timewarpian, she admits that part of her is. “I enjoy the comforts of modern age too much to give them up. I guess you could say I’m a Timewarpian Hybrid."

Jenny enjoys the clothing, the cooking, the books and cookbooks, the shows, the etiquette, the values and morals. And she strives to incorporate that into her life both in how she looks and in her home. Jenny then added, “I think balance between the two worlds is a good thing.”

We asked Jenny what year she would visit if she could travel back in time.

“I don’t think I could pick a specific year to go back to. I could narrow it down to the WWII and post WWII era. I know it was a hard time with the war. My own husband has been to war twice now for a year each time, so I have a taste of what it would be like. Its such a huge part of American history and how amazing would it have been to live through that. It seems like Americans really banded together, working together toward a common cause. Post WWII is because it was a time of hope and joy. The part I don’t think I could handle would be the inequality between the races, it breaks my heart to know how minorities were treated back then.”

She shared with us her goals: "I was recently diagnosed with Celiac Disease. So I'm currently working on a gluten free cookbook. And I'm hoping [to get] published in a couple of years."

Her short term goals are: Work out 3-5 days a week. Eat well. Take care of her appearance. Then she added, “bite my tongue when I don’t have anything positive to say.” 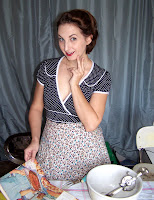 Update: Jenny changed her blog address to fit her theme. Below is her new address.

Posted by Carmen Johnson at 1:26 PM