"I've always had this wish to have a 'glamorous' life, which pretty much meant wearing pretty vintagey and princessy outfits all the time, but I never felt like I could give up all the other great clothes that didn't fit that aesthetic. Then my style sort of naturally evolved into that ideal anyway." 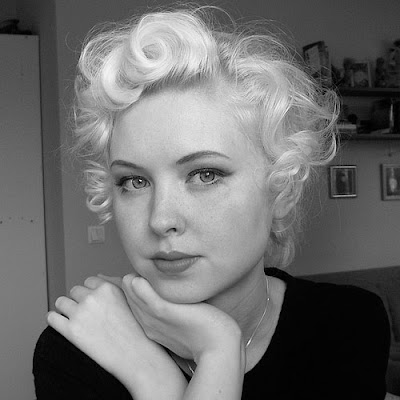 Swedish artist Johanna Öst loves clothes, beauty, and vintage fashion. She started "The Wardrobe Project," to clean out her wardrobe and go through all her clothes that she rarely used. Johanna incorporated every garment into a great outfit, in which she would take a picture of. Now she has a catalog of great outfits for inspiration.


This self-taught Swedish artist finds inspiration in her life from anything that is beautiful, exiting, or mysterious. Johanna's Öst dreamy and unique arts and illustrations are known all over the world. "I've been drawing and painting all my life. All kids draw and I did too, and I never stopped. In my art I'm very inspired by folklore, mythology, and fairy tales," Johanna added.


Johanna speaks fluent Swedish and English, and a bit of French. She loves toys, mainly vintage. She is especially a huge fan of Barbie, which she herself collects. Johanna also loves making things, weather it's painting, sculpting, various crafts or anything creative she can make with her hands.


Besides being a very creative artist, Johanna is also a university history student. She's been going to the history candidate program at university for about a year now. She has also taken a short university class on historical fashion.


Her interest in history started as a kid. "I was especially into kings and royalty, and Gustaf III, the late 18th century Swedish king, has always intrigued me." Johanna's biggest history interest are the 18th century, mainly the 1770s, -80s and early -90s. She spends a lot of time researching those times and especially the fashions. She even makes her own 18th century clothes and sometimes she goes to such events.


We asked Johanna what her dream job would be. "I would love to be able to live more comfortably off my art and illustration work, but I'd also love working at a museum with historical clothing. Ideally I'd do both."


Johanna loves clothes, beauty, and vintage fashion. She said that she loves lots of other styles as well, but that she feels the the vintage style is the ultimate for her. As long as she can remember Johanna always loved looking through old magazines and pictures and the typical glamorous 50's and 60's bombshell has always been something of an aesthetic ideal to her.


When she described her vintage style Johanna said that she mostly wears 50's and 60's styles. She especially wears early 60's, which is the perfect mix of the 50's and 60's. She does occasionally though wear something more of the 40's. She also adores the 80's fashion, although she doesn't wear as much 80's styles anymore. And, as she mentioned earlier, she loves the fashion of the later part of the 18th century.


The Wardrobe Project is a photo catalog of Johanna's outfits. She started the project to clean out her wardrobe. Johanna explained, "I had so much stuff and some things rarely ever got worn, so I decided to go through it all, incorporate every garment into a great outfit, and take a picture. That way I would use it all, discover which things actually didn't look good in any outfit and should therefore go, and I'd have a catalogue of great outfits for inspiration."


Some of her outfits featured in the project are either inherited, given to her by friends, or bought at flea markets, thrift stores, ebay, or online stores. Some of it is just regular clothes from regular stores that just happen to work with the look. To achieve her retro look, Johanna sets her hair with pincurls and then hairsprays it. On her personal blog, Johanna explains in details her basic makeup products that she wears for her photo shoot.


Her living room/kitchen/dining area is decorated in a mid-century inspired style (pictures below). The sideboard, sofa, and chairs in the living room are all vintage. The coffee table and the other sideboard beneath the window are both from IKEA's "Stockholm" series, which is mid-century inspired. "We have a 60's sofa set and a bunch of other vintage or vintage reproduction furniture. The dining area is inspired by american diners. My vintage toys and dolls are also displayed all over the place."


Johanna doesn't considers herself a Timewarpian. "I believe that things are always getting better. I'm into the aesthetics and pop culture of the past, not the morals. I think I'm living in the best time possible. And I would have missed so much great music and movies if I actually wanted to live in an earlier time!"


We asked Johanna what year she would visit if she could travel back in time.


Some of her favorite things:
Movie: Gone with the Wind. "It's been my favorite since the first time I saw it as a kid. It's just the best. The story, the actors, the costumes, everything is amazing."


Her favorite place in the world: Disneyland! And being at home.


When asked Johanna how would she describe herself, "A creative hermit who loves beautiful things." 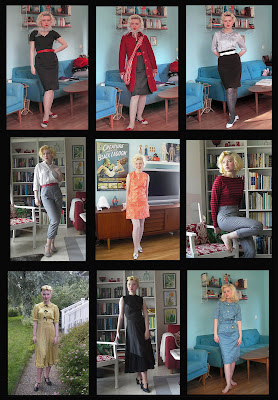 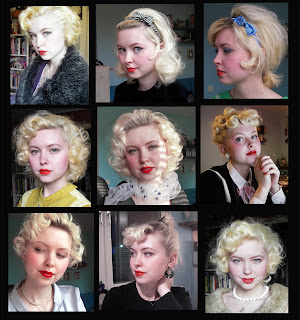 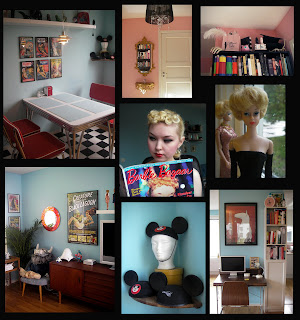 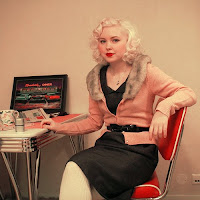 Johanna's Art and Portfolio Website. Here you can also purchase her art work.http://johannaost.com/


Her makeup review post from her Personal Blog: Johanna's Blog