“On my free time you can find me always at antique shops and at antique street markets. I never watch the news, I never listen to modern things. You can say I have not much with this modern world today.” 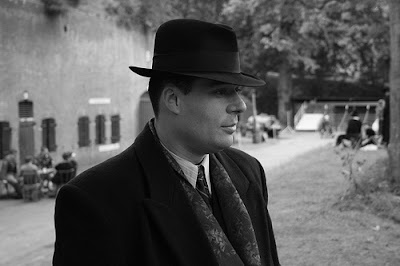 Mark is a historic consultant and works as a Senior of Security in Rijksmuseum Amsterdam. This guest is not only passionate about history, but he believes in an old fashion lifestyle, etiquette, and being a true gentleman.


Besides his work, Mark is studying integral security management at the Hogeschool Utrecht . He is also hoping to start studying history next year at the university. Mark speaks Dutch, English, and German. And he describes himself as a friendly and honest person.


Mark’s passion for vintage started about 15 years ago. “I started slowly to decorate my house with 19th century furniture.” Mark said that he loves almost everything pre-war. The cars, the trains, the fashion, the films, architecture, but as well the behavior of people.


His website, “The True Gentleman“, is all about how a proper old fashioned gentlemen should behave, how he should be dressed and how he should interact with other people. Mark said that being a true gentleman is a lifestyle to be lived 24 hours a day, it is a behavior, a passion to oneself, to other people, as well a way of thinking and dressing.


Mark belongs to a history group called the “Historical Consultancy 30-45”. Which is a historical advice service about life in the first half of the 20th century and especially the years 1930 – 1945. Mark also belongs to “Club Interbellum” (The interbellum is the period between two wars). This club is for Nostalgists (people who put their nostalgic feelings into practice) and for anyone that are interested in the decades of the 20‘s, 30‘s, and 40‘s. Besides those historical eras, Mark is also fascinated with the Victorian period.


This true gentleman also has an eye for fashion and style. He describes his vintage style as “old-fashioned“, but not conservative. “My style is pre- war from 1900 till 1940”. We asked Mark what is his favorite period for fashion. “Very hard to say. Something more Victorian, something 1930's. But I think the end of the 1930's I love the most,” which by the way, is the style he wears daily. Mark will never leave his home without his hat.


Mark considers himself to be a Timewarpian. “Yes indeed, I do noting else. I never watch news, I never listen to modern things. You can say I have not much with this modern world today.” His house is decorated in complete 1900‘s styles, as well as some "modern" things like a 1930’s era radio and a gramophone. Mark certainly lives a 100% nostalgic lifestyle!


The types of vintage events that Mark enjoys are anything that has a pre-war theme. He also spends time with his history group where they go to a cinema, spends a weekend at a 1930’s airport , or enjoys listening to old music. “On my free time you can find me always at antique shops, antique streets market. We have here daily in Amsterdam the Waterlooplein market. That is for sure my favorite vintage place.”


What would you like to bring back from the past? “For sure the fashion. The old fashion just make the people more beautiful then they are in modern clothes. We lost a lot from the pre-war period.” And besides the old fashion clothes Mark believes that we should bring back the old fashion behavior, which would make everything easier in life.