"I'm not sure if I can really define a "time warp wife". However what I seem to like best is a woman who lives in the modern world but retains the civility, and ideals of the 'time warp' world." 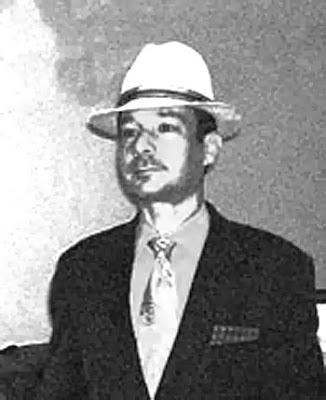 Writer and columnist Leonard from South Florida describes what his ideal wife would be like. Although Leonard doesn't considers himself a Timewarpian, he appreciates the civility and ideals of the past.


Leonard is from Washington DC, but now resides in South Florida. He works in PR and also as an advertising manager for a real estate investment company. He is also a paid columnist and a writer. “I get dressed up in a suit and tie every day!” he says.


His hobbies are writing, reading, and people watching. He admits that he surfs the web a bit too much. That's how he found our Time Warp Wives website. Leonard said that he enjoys the martini bar/ mohito bar. And that he is hoping to find a good salsa partner. He also likes to travel locally. He'll occasionally visit the casino, or travel to South Beach, Miami. He also attends religious services and likes to spend time with his parents.


We asked Leonard what appeals to him about Time Warp Wives.
“I'm not sure if I can really define a 'time warp wife'. However, what I seem to like best is a woman who lives in the modern world but retains the civility, and ideals of the 'time warp' world. Unfortunately, I usually seem to find uber-feminists. I like independent, well-spoken women. I don't want women to step backwards. I want both women and men to remember manors, and common decency lost from our nations recent past.”


Leonard said that he is attracted to a woman that is both modern and traditional. Then he explained what his ideal wife would be like. “Someone who is not looking for a hero or an escape, or to be completed, just a woman who needs a man, and a mate for life.” Leonard said that as a husband he will offer his honesty, integrity, and loyalty. His best attributes are that he is very patient, entrepreneurial, and he has a great sense of humor. He is also a good cook, and good to kids and pets.


Leonard describes what his dream family life would be like: “A small place in the city, private school for the children, careers for both the wife and husband, with plenty of time for the children.” His family values are to support and sacrifice for wife and children.


We asked Leonard why he considers himself as a future Time Warp Husband. “I live in a modern age, yet embody the best of the past era.”


Leonard's passion for vintage started from his father who collects antique cars, antique radios, and still uses a typewriter. One of Leonard’s favorite vintage finds is his 1930’s tube radio with a lit dial. He turns it on every night. And his favorite vintage style is of the 60’s suits as seen in Madmen on TV.


When asked if he considers himself a Timewarpian he said, “I don't live in the past, but I seek to take the best from it."


Then we asked Leonard if he had a chance to go back in time, what year would that be and why.
“Late 50's-60's. The style, and the time, society was at its intellectual peak.”


“OK, there were some bad things about the era, racism, etc, and yet there were so many good things too. Aside from people who chose to dress up and wear a suit and tie and hat, rather than a Megadeth t-shirt and flip flops, there was much more civility. People had a common pride in the nation. It was a time of optimism and not pessimism. Downtowns were booming, cars were works of art. People got dressed up to go to the theater, to go on an airplane, or on train, and to a religious service. In schools, getting good grades was something others looked to in a positive way. Service to the country, and patriotism was considered to be positive. A man could have an agreement with another man on a handshake and not via a lawyer's order. People actually read books and the newspaper objectively. Quite a few things.”