”We provide a one-stop shop for vintage-inspired, kitsch, and retro goodies for you and your home!” Wife and London businesswoman Fiona owns "Notorious Kitsch", an online store which offers the best products that have a vintage, retro, and kitsch twist. Find out how she is able to balance her family life and business successfully.


Fiona is from a small town in the North East called Eaglescliffe. She moved to London when she was 20 and has been in the South East where she and her husband resides. Since her late teens, Fiona has been interested in vintage clothes, lifestyle, and music. For some time she had the idea of selling retro. That idea became a reality in 2007 when she founded her company Notorious Kitsch.


It all started when Fiona and her husband visited the US on holiday’s. They would come back home with loads of vintage clothes, home ware, vintage inspired things like notebooks, photo albums, and cocktail swizzle sticks. “You name it we bought it. So I got to thinking where do you buy these things in the UK because I never find them! It was a long time in planning and we did have a false start when we got going and had to put it on hold for a couple of years. However eventually we started full time in January 2008.”


One of the things that Fiona loves about her business is the buying and selling. She loves searching for fabulous things that she knows people will die for when they see them. Also she likes finding the little things that are useful but that have that vintage/retro/kitsch twist. “Who would have thought that the vintage design tea towels on the site would be one of the most popular, they are very nice yet seem so mundane, but people want nice things in all areas of their life!”


Fiona also loves selling at events. And despite the hard work in setting up the things for the event, Fiona enjoys the face-to-face connection that she gets with her customers. “There’s nothing nicer than seeing people so enthusiastic about what you are selling, or them decided to redecorate their whole bathroom on the basis of a shower curtain you are selling, obviously I don’t get to see this much when selling online, so it’s nice to see customer reaction.”


“It’s a full time job, it’s almost impossible to run a professional company part time, although I know some people do it, I’m sadly not that much of a wonder woman! Having said that, it’s made things tougher financially as my husband can’t work due to a disability so it’s meant that we have had to tough out the worst recession to hit since the 30’s whilst trying to build a new business!”


We asked Fiona how she is able to balance being a businesswoman and a wife?


“I don’t find that the balance is a problem, but that’s probably because my husband is my biggest cheerleader! Also I don’t have an old fashioned attitude towards being a wife, and fortunately neither does my husband.”


What are your best business attributes?


One of the things that make Notorious Kitsch unique is Fiona herself. “I try very, very hard to find the best repro vintage, retro and kitsch products I possibly can, and most importantly make sure it’s good quality and not rubbish. I don’t want to buy something that looks good but falls apart in a week and neither do my customers. I think very hard before committing to a line whether my customers would love it or not. I don’t listen to ‘trends’. We’re not in that business. We’re in the business of giving people what they want, so I listen and respond to feedback. I’m also big on customer service. One of my biggest bugbears is bad customer service, can’t stand it. So at NK you will always get excellent customer service.”


Notorious Kitsch carries a variety of retro inspired items. They carry everything from Hula Girl shower curtains, to repro vintage tablecloths, to Anne Taintor cocktail flasks, to retro football wash bags. “We carry what we find and we like within a certain theme.”


Their popular selling item changes according to the season. Some of most popular items range from the hula girl shower curtain to the tiki mug and mini tiki mugs. One of their most popular items is their drying up clothes. “Strange but true,” Fiona adds.


Fiona said that she loves the 50’s, vintage clothes, and in her opinion the 50’s R 'n’ B is the best music by far. She also embraces modernity, however. “Although we’re more mix & match people, we do have a lot of 50’s furniture including a fabulous cocktail cabinet, but we also have modern repro stuff.”


We asked Fiona if she was a Timewarpian.


“I was much more Timewarpian when I was younger, but as I’ve got older I realize I like many things and my ‘timewarpian’ ways were stopping me experience them. Would I prefer a fabulous 50’s house with all the trappings? Well, yes. But I’d still like all my modern bits, even if they were hidden away stylishly. Sadly I don’t have all the money in the world, so currently it all sits side by side and seems very happy! I have to say; I don’t judge either side of the fence on this one. I can see the appeal of having a house totally in one period. I’ve walked into such houses and thought, wow I wish my house looked like that, or I wish I had that car. But in reality, I like my mix and match lifestyle, that way I get the best of both worlds.”


If you had a chance to go back in time, what year would that be and why?
”Probably early 50’s America, because I particularly like the clothes, music, furniture and houses from then, but the truth is I wouldn’t want to. I like being able to wear those clothes, listening to that music and leading a modern woman’s life!”


Fiona’s favorite old black and white film is It’s a Wonderful Life. Her favorite old time movie actress is Ava Gardener. The reason why she likes this actress is because she wants to look like her. 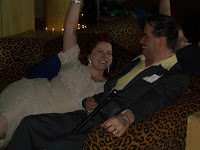 Posted by Carmen Johnson at 4:00 PM