“I've learned that the homemakers back then were some tough broads! You had to be in order to get everything done in such a stylish and gracious manner without expecting a salary in return.” 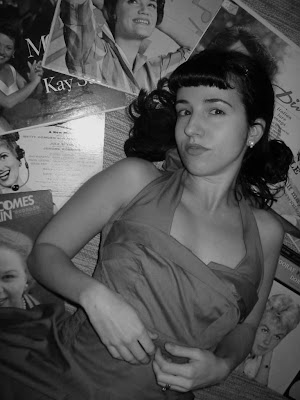 Star of “My 50’s Life”, Marzipan Jones is living as a 1950’s housewife for a whole year. Her most difficult challenge is not being a housewife or a mom, but rather is that she has to be made up everyday; dresses, stockings and heels while she performs her housewife duties.

Marzipan lives in Western Massachusetts with her husband and their 4 year old little girl. She is originally from upmarket suburb, West Hartford, Connecticut which rank the 76th in Money Magazine's 2008 Best Places to Live.“ As you can imagine it's fairly well-off and fairly preppy. I was definitely a square peg!”

Her husband is a screenwriter and the creative director of Mirage Studios. “He thinks about Teenage Mutant Ninja Turtles all day long. He's stuck in the 80's while I'm stuck in the 50's!” Marzipan is not only a homemaker but she is also freelancer writer and a poet. Her works have been published in many literary journals.

We asked Marzipan what is the 50’s year housewife. “The 50's year housewife is Marzipan Jones, my alter ego. I'm basically living out the next year as a stereotypical 50's housewife and following the golden rules of such wifedom.”

Marzipan Jones had been meaning to conduct a year-long experiment for a long time and always had the idea of “doing a 50's year” in the back of her mind. “I've always been extremely interested in 50's pop culture: the music, the literature, the films, and especially the clothes! And as a feminist who respects a woman's choice to stay home, I always found the 50's notion of a June Cleaver-type to be both intriguing and a bit frightening."
So when Jones found herself staying at home with her child, she thought, why not do it all the way?

She started her social experiment on her daughter's first day of this school year, September 3rd, 2008. “The first day was the toughest! I was a lot less relaxed then about the idea of a 50's wife and got up rearing to go like a frantic squirrel. I coaxed myself into thinking I had to look completely "done" by the time I ate breakfast. Now that I've watched "I Love Lucy" I know that women didn't always look perfect when getting their kids ready for school". She also ran ragged that day trying to spend every minute performing housewifely chores. “I space my time out better now and as a result am not as sore when I wake up in the morning," she added.

When asked what were her 50’s housewife Rules she said, “I can't use any kitchen appliances that wasn't invented in the 50's. I can't listen to cds or watch movies if they're not on the tube. I can only consume that which was created prior to or in the 50's. I get all my news from my husband." Marzipan is also not allowed to partake of any modern media including newspapers, magazines, books, movies, or music. She has allowed herself though to use the internet when it relates to the project or to her writing career. “As my readers have assured me, helping out with the family finances is more 50's housewife than not!"

There are some exceptions to the rules. Marzipan is allowed to use equipment if it relates to her daughter's health or entertainment. “I use a nebulizer for her asthma and I will let her watch dvds or listen to her "They Might be Giants" cds. I tried making her into a 50's kid for a few days and let's just say she went a little crazy." Marzipan does try to incorporate more "retro" activities into her daughters days like; pumpkin picking, hayrides, painting, reading books, playing with puppets, and playing board games.

In her 50's Year experiment Marzipan also has to dress according to the fashions of the time: heels, stockings, garters, pointy bra, skirts, dresses, sweaters, gloves, hats. “So far the pointy bra has been a bust (no pun intended) and I'm hoping to find one that actually fits!"

We asked her what were her 50’s housewife duties and schedule like. “The home has become the central part of my identity so my duties are cooking, cleaning, grocery shopping, anything that has to do with the cleanliness of my home except that which is traditionally man's work: garbage, yard, handyman work. And of course, caring for my daughter."

The month of October 2008, Marzipan had broken her foot, so her schedule was thrown off. Her schedule prior to her foot incident consisted of waking up at 7am, fixing her daughter’s breakfast, getting dressed, taking her daughter to school, and cramming in as many chores as possible in the 2 1/2 hours while her daughter was gone.


Included are the other chores that go along with a day: toting her daughter to playdates, cleaning up after 2 cats and her daughter, making meals, cleaning dishes, and generally tidying up. “Sometimes finding the time to incorporate the chores is a chore in itself!" she said.

I also try to read 50's magazines during the day when I get a moment, just to feel "in touch" with the times and to garner sartorial or social inspiration.

Marzipan said the easiest thing about the 50’s experiment has been the cleaning. “I do enjoy it and do feel much better knowing my house isn't a mess!" Though the most difficult thing that she said about her social experiment has been the pressure to look "done" while she is cleaning. “Hose get torn, garters slip, and I've even ripped a few dressed from bending. I suppose I'm still not used to wearing tailored clothing while I stretch!"

Another difficult aspect has been her husband's reception of the new 50's self. “He loves to cook and before this project we split the household chores equally. It's funny but he actually enjoys doing these things so when I tried to take them away from him he didn't like it one bit. In fact, we were having so many arguments about my taking over that I eventually let him do his own laundry and ironing." I figure it's more 50's housewife of me to let him do whatever will make him happy. After all, that's my purpose, to make my family as content and comfy as possible.

We asked Marzipan what she have learn so far about your 50‘s experience.
I've learned that the homemakers back then were some tough broads! You had to be in order to get everything done in such a stylish and gracious manner without expecting a salary in return. I also lend my own role as mother and wife more value for some reason. Modern society doesn't really appreciate work that has no monetary receipt. People are often valued according to how much money they make. I struggled with this as a freelance writer making much, much less than her husband. This throwback into 50's magazines and ideas about motherhood hasn't made me want to give up non-wifely pursuits, but it has helped in not making me feel unfeminist or like a failure for not having a "real" job."

Her blog “My 50’s Life” documents some of what is going on in her day-to-day life as a 50's housewife. She also keeps a diary where she jots down notes about her experiences and some of these get transferred into the blog. “Sometimes I post about aspects of 50's pop culture that I also find interesting or amusing such as the whole duck and cover idea as well as retro food-related pieces."

Marzipan have a passion for any music that is raw and visceral which brought her to Billie Holiday and Chet Baker. She also fell in love with torch singers of the 30's and 40's like Ivie Anderson and that led me to 50's singers like Lena Horne, Rosemary Clooney, and Julie London. "These dames had so much class, glamour, and spunk that popular modern singers (Madeleine Peyroux and Nellie McKay excluded) just couldn't compare to. I also really enjoyed the way they dressed. In a time of belly-baring tops and low-slung jeans, I loved the throwback to a more mysterious look," she added.

When asked to describe her vintage style. “I know that as a 50's housewife I'm supposed to wear mostly shirtwaist dresses but I can't help loving cardigans and skirts for every day. They can be both flirty and demure depending on how you walk in them or what shoes you pair with what. Her 50's make-up consists of liquid foundation, loose powder, eye-shadow in brown or white, black eyeliner, black mascara, and lipstick in either pink or red. “I love Revlon's 'Cherries in the Snow', a classic!"

Regarding her hair, it's naturally wavy so she doesn't need to curl all that often, “I do curl for special occasions like a party or going to dinner. I usually use bobby pins to give it some volume or I wear a headband for a more prim effect. Sometimes when I'm feeling a bit more 40s I wear Victory Rolls."

The 50’s social experiment has given Marzipan more self-esteem when it comes to her abilities as a mother and wife. “I know how to bake a cake from scratch now and the right way to darn socks which doesn't seem like much but little things do somehow round a person out,” she added.

We asked her what advice would she give to anyone that want to do this retro experiment. “Brace yourself! Especially if you're a stereotypically modern woman who loves her microwave and take-out! Oh, and make sure you have the right wardrobe for the part beforehand. I can't tell you how many times I've looked at my closet in a panic because I don't have enough to wear!"